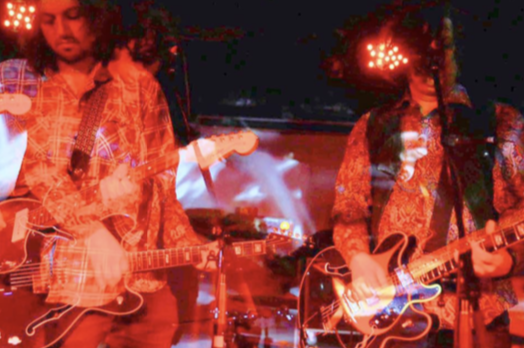 Festival-goers will be able to groove into darkness at this year’s WinterWild festival taking place across August 16 – 18 and August 30 – September 1. Embracing themes of ‘visions and ecstasies’, acts will span from the sacred music of Max Riebl, and transition into the depths of darkness with Black Heart Death Cult.

Step into Apollo Bay’s oldest venue ‘The Mech’ for a night of kaleidoscopic visions and mind-altering reverberations with some of Melbourne’s finest psychedelic talent at Visions of Excess. Black Heart Death Cult and Flyying Colours will take the stage as vintage light projections from Electric Light Brigade bleed into the space. 17 August 8pm, The Mech, $35 + booking fee.

Bathe in the ethereal, spine-tingling voice of countertenor
Max Riebl, who combines his mastery as a baroque
musician with the vocal power and presence of a true pop artist. Max Riebl’s Apollo Bay debut includes sacred songs from Handel, Purcell and Bach contrasted with some more profane works from the 20th Century. 17 August 8pm, Our Lady Star of the Sea Church, $35 + booking fee.

Celebrate intimate epiphanies as Little Lake presents Seagull for rolling waves of viola and organ, and Yffer who weave between harsh textures of primitive electric guitars with drumming of bare simplicity, and a voice full of fearless vulnerability. Lucy Roleff will bring her whimsical, mystical folk as she sings to the melancholy of the unnoticed shadow. 31 August 8pm, Apollo Bay Surf Lifesaving Club, $25 + booking fee.

One of Australia’s most popular rappers, Mantra will flex his vocals as he entwines soul with social conscience to explore the power of word and its universality. Dubbed the “rapper’s rapper”, Mantra will show why he’s carved out his place on the scene over the last eight years. 30 August 8:30pm, Apollo Bay Surf Lifesaving Club, $25 + booking fee.

One of the oldest instruments in the world, the Yidaki (didgeridoo) will call forth the Music Universalis (Music of the Spheres) to describe the celestial bodies of the sun, moon and planets as a form of music with healer Lionel Lauch from Living Culture. Immerse yourself in primal sounds as the didgeridoo guides a healing and meditative session. 17 August 4:30pm, United Church Hall, $30 + booking fee.

To discover a side of Apollo Bay that’s not often seen, head to winterwild.com.au for the full line-up and tickets to take a plunge into the sacred and the profane.