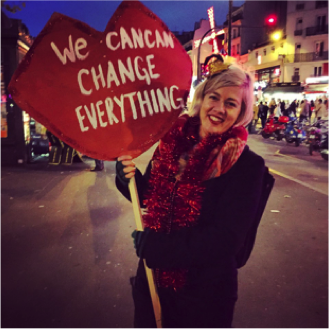 The Melbourne Women in Film Festival (MWFF) is pleased to announce this year’s recipient of the Compton School Scholarship – Alex Kelly.

Alex Kelly has a variety of credits as a social impact producer. She is a filmmaker, artist and communications and campaign strategist who is highly committed to social justice. Kelly worked for ten years with Big hART as Creative Producer of Ngapartji Ngapartji (2005 – 2010) and was National Producer from 2012-2014. Kelly’s documentary credits include producing Island of the Hungry Ghosts (2018), The Island (2017, screened at MWFF 2019), Nothing Rhymes with Ngapartji (2010), co-producing The Namatjira Project (2017), production managing Coniston: Telling it True (2013) and directing Queen of the Desert (2013). Alex was the Global Impact & Distribution Producer on Avi Lewis and Naomi Klein’s This Changes Everything project (2015). She is currently working on Maya Newell’s forthcoming film In My Blood It Runs as associate producer and impact producer.

On receiving the scholarship, Kelly says: “I am so honoured! Being an independent artist can at times be lonely – and opportunities for reflection and skilling up outside of the urgency and grind of the work can be hard to come by. I am so looking forward to a deep dive in to creative leadership at this dynamic new institution. I am so grateful to the Melbourne Women in Film Festival and the Compton School.”

Festival Director Dr Sian Mitchell says: “We’re incredibly proud to be able to offer women filmmakers more opportunities to advance their careers, especially when it comes to positions of leadership, where we need to see more women. We are grateful to the Compton School for working with us on this scholarship and wish Alex all the best. She’s a worthy recipient.”

As part of 2019’s Melbourne Women in Film Festival, MWFF partnered with Compton School to give one of its programmed filmmakers the opportunity to take a creative industries course. Compton School is Australia’s first creative industries business school with courses in Creative Leadership, Creative Intelligence, and getting work ready. Courses are delivered by leading industry representatives such as producers Sue Maslin (The Dressmaker) and Andrea Buck (The Jammed). Kelly will receive a full scholarship to attend Maslin’s Creative Leadership course.

The Melbourne Women in Film Festival proudly supports and promotes the unique, creative and diverse voices of Australian women screen practitioners and their work. MWFF makes a valuable contribution to our local culture by engaging audiences in a festival celebrating different stories about women; stories that can make a difference to women’s lives.