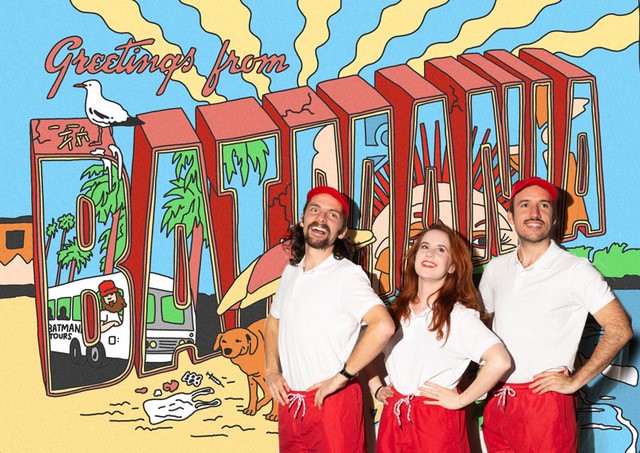 Melbourne Fringe Festival is back in 2019, illuminating the whole of Melbourne from 12 – 29 September with 455 events that push boundaries and celebrate independent artists across all art forms. Forty events will bring The City of Port Phillip to life, giving locals and visitors alike the chance to see everything from mass karaoke for kids to a circus show about baby making. There is plenty to see around the bay during Melbourne Fringe Festival. Highlights include:

Batmania, The Bus Tour (pictured above)
Audiences will climb aboard this ‘tour’ on a journey that celebrates what this great, southern land has to offer; from fine wines organically sourced from the Coal Regions of Adani all the way to colonialism, and everything in between. This surreal, twisted, horror comedy is presented by The Very Good Looking Initiative. Showing at Theatre Works (11 – 21 September)

Do You Even Gestate, Bro?
Through unique acrobatic display, Elemental Performance Troupe explains the birds and the bees, allowing the audience to experience the miracle of life through the language of circus. Audiences will be taken on a ridiculously energetic and voyeuristic story of babyhood including a sperm race, male gestation and plenty of flying nappies. Showing at Gasworks Art Park (19 – 21 September)

Put Your Damn Phone Down
Sometimes, reconnecting means disconnecting. Host Glenn Manton will guide audiences through some frank and illuminating questions, in an interactive forum-style show held on the balcony of the beloved ‘Espy’. Attendees will be invited to discuss some big (and not so big) questions about technology and its effect on themselves and society as a whole. Showing at Hotel Esplanade – Balcony Bar (Mon – Thu, 16 – 26 September)

Loop Your Heart Out
Two live looping artists using different technology battle it out in an epic loops-of-the-century fight to the death. Expect samples from Beyoncé and Ed Sheeran suddenly intertwined with the classics of Toto and Phil Collins, all brought to life by musicians Frankie Jay and Jake Alexander. Showing at Alex Theatre (21 & 27 September)

Kid-aoke
Mass karaoke for kids! This interactive children’s show designed especially for ages 5–10 is a safe, inclusive, and wacky space for kids to celebrate the fun of singing and dressing-up with their friends and family. Kids (and the young at heart) will join Melbourne queer performance artists Bae Marie and Cameron Thomas in a group sing-along, interactive dress-up party, and karaoke extravaganza. Showing at Gasworks Arts Park – Studio Theatre (24 – 26 September)

Mad as a Cute Snake
A children’s theatre show, and riotous adventure, about having the courage to be yourself, no matter what. Join Cardigan Coriander-Turner as she travels from suburban Melbourne to the Daintree Rainforest in efforts to save her family’s pet snake from certain tragedy. Featuring clowning, backyard acrobatics and original songs, this show is a sort-of-sequel from the team behind Superhero Training Academy. Showing at Theatre Works (25 – 28 September)