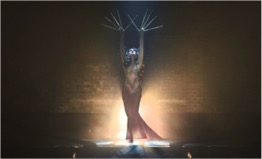 Melbourne Fringe Festival will put a hot topic under the spotlight this year, with a provocative line-up of performances from 12 – 29 September. From opera to politics, comedy to cabaret, no stone will be left unturned as these performers use the stage to address issues surrounding climate change.

Globally-acclaimed Moira Finucane (pictured right) will be unleashing the sequel to her award-winning show, The Rapture Chapter II: Art vs Extinction, gracing audiences with a stunningly immersive event. With 40 astonishing artistic collaborators joining forces to deliver both audible and edible artworks, singing that is operatic beyond gender and genre (Mama Alto, Piera Dennerstein and Shirley Cattunar)and words of profound cultural power (Ray Dimakarri Dixon), guests will be taken on a journey to the end of the world. This is immersive art meets cabaret of the apocalypse – an experience not to be missed. 5 – 29 September, fortyfivedownstairs.

Fast forward to 2025 and, as sea levels continue to rise, the Great Nation of Australia sends Jordan Prosser and Sam Burns-Warr to prepare the people of an island nation for their imminent doom in Bringing Some Gum to a Knife Fight. Stepping into the characters of Australia’s two most gifted and handsome climate scientists, this Melburnian writer-performer duo take the audience through a series of scientific experiments and hands-on demonstrations, evolving into a surrealistic romp through politics, evolution and the looming spectre of climate change. 12 – 20 September, Fringe Hub: Trades Hall – Old Council Chambers.

What Am I Supposed To Do? is a dark, cautionary, yet hopeful tale which stares into the hypocrises that surround trying to do good in the face of climatic catastrophe. Jump in the twin-cab ute with Deep Soulful Sweats (Sarah Aiken and Rebecca Jensen) for an eye-opening ride through the cultural detritus of colonial Australia. Directed live, the show’s entire audience will participate in a collage of drama, narrative, and movement, heavy on the symbolism. 18 – 22 September, Arts Centre Melbourne –  Fairfax Studio.

Forward thinking production company Picked Last For Sport present their next instalment of their environmentally progressive production series, Creatures Lost. A cabaret full of heart and laughs, the show comes after its prequel Creatures of the Deep was awarded Best Cabaret – Melbourne Fringe Festival 2018. Brought to life by the production company’s co-founders Ryan Smith and Sarah Wall, all costumes and props used in the show are sourced from recyclables and up-cycled materials. 16 – 22 September, The Butterfly Club.

Kiwi climate activist, ordained Buddhist and stand-up comedian Tejopala Rawls brings his true life story to the stage in Killing the Planet is Against My Religion, asking universal questions such as ‘can you attain enlightenment by working flat-out as a climate activist?’ and ‘why the hell do I live in Australia when I could have Jacinda Ardern as a Prime Minister?’. Climate advocacy meets hilarity in this gem of a stand-up performance. 23 – 29 September (no performance Saturday), Crowded in the Vaults – Vault 11.