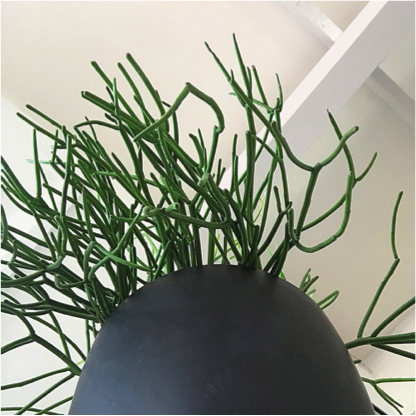 Melbourne-based artist Julie Shiels will present a new body of photographic works in an exhibition titled Hidden Life, A Domestic Study at Linden New Art’s newly opened gallery, Linden Projects Space from Thursday 3 October until Thursday 3 November. Re-contextualising found or overlooked spaces, this photographic series turns the selfie function on a mobile phone away from the self in order to see what can be revealed about the world of objects and spaces.

Shot from below, the photographs defamiliarise the ordinary and draw attention to the overlooked relationship between things and the places they inhabit. The familiar becomes strange when this popular and generally narcissistic mode of photography is subverted.

The images in this exhibition centre on the domestic environment and were mainly shot in the artists’ home. They form part of a larger Hidden Life series, which also draws on house museums and commercial spaces. This body of work encourages us to look more carefully at the world around us, especially the things that are hidden in plain sight.

Linden New Art curator Juliette Hanson said: “We are excited to show the work of such an accomplished artist. It is a fantastic way to continue the program in the brand new Linden Projects Space. ”

Shiels has exhibited widely across Victoria and internationally for almost 20 years. Her work is represented in a number of prestigious collections including, the Australian National Gallery, Art Gallery of New South Wales, ACMI, Geelong Regional Gallery and Powerhouse Museum, Sydney. Shiels’ work has been included in many group exhibitions, most recently in Unfinished Business: Perspectives on art and Feminism (2018) at the Australian Centre for Contemporary Art, Land/resistance, Defying Empire at the National Gallery of Australia (2017) and Don’t Be Too Polite: Posters and Activism at the Ian Potter Museum of Art.

Julie Shiels completed her PhD at the Victorian College of the Arts in 2015 and was the recipient of the University of Melbourne’s Stella Mary Langford Post Graduate Scholarship. Prior to that she was awarded a Masters of Art at RMIT University in 2006 where she is a sessional lecturer in the School of Art.

The new Linden Projects Space is designed to spotlight the talent of artists and curators living and working on the southside of Melbourne.