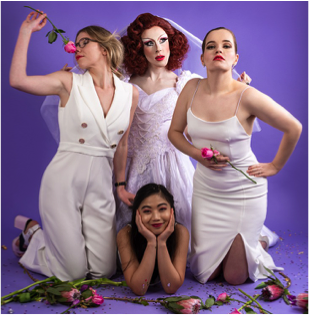 Melbourne Fringe is finally upon us and for 18 days straight, Melburnians will be spoilt for choice with 455 shows across all artforms. Expect the weird, wonderful, captivating and creative program to bring our city to life from 12–29 September. Some of the highlights for the first week of the festival include:

Fringe kicks off in fabulous style at Club Fringe: Opening Night Party, as the doors to the new Fringe Hub at Trades Hall burst open. The dress code is EXTREME and nothing is too over the top. 12 September, Fringe Hub: Trades Hall – Old Ballroom + ETU Ballroom.

Polygamy, Polygayou (pictured right) is a hot new musical about love, sisterhood and the bonds of matrimony. In the forgotten town of Old South Wales, three sister wives have been in a loving group marriage with their darling husband Edgar. When Edgar dies suddenly, the wives farewell him through song, catching the attention of a big-shot Hollywood music producer. 12–20 September, Fringe Hub: Trades Hall – Old Ballroom.

Bryony Kimmings, one of the UK’s most significant performance makers, heads to Melbourne with solo theatre masterpiece I’m a Phoenix, Bitch, combining personal stories with epic film and original pop songs.Bryony is dealing with life again following a postnatal breakdown and an imploding relationship, wearing the scars like a dark and heavy cloak, in this powerful, dark and joyous tour de force. 11–15 September, Arts Centre Melbourne.

Winner of Best Cabaret at Perth Fringe World, YUMMY DELUXE is back in Melbourne after touring the globe. A mix of YUMMY favourites and new acts will take audiences on a deliciously unpredictable ride of their lives. 12–29 September, Fringe Hub: Trades Hall – ETU Ballroom.

Burlesque legend Strawberry Siren presents Pussy Play Masterclass– an interactive and playful masterclass filled with original techniques to perfect the art of playing with your partner’s pussy or even your own.Ever made a pussy out of plasticine? Now is the time to get up close and personal with our vulvas. 12–20 September, Fringe Hub: Trades Hall – Archive Room.

Restless, anxious and strangely liberated by having no life plan; Anna Lumb wonders if everyone else is faking it too.Hard to Reach Places is a day in a woman’s life played out non-sequentially as she navigates the challenges of parenting, relationships, show business, visible ageing and the unrealistic expectations she places on herself and others. 12–20 September, Fringe Hub: Trades Hall – Quilt Room.

Rosy Carrickhas to build a time machinein Passionate Machine,because her future self has already done so and is now stuck 100 years in the past. Given that her knowledge of quantum physics is limited to the works of Arnold Schwarzenegger, Rosy must summon the help of science’s greatest minds if she is to rewrite history and save herself. Winner of Brighton Fringe’s Best New Play Award 2018. 16–22 September, The Butterfly Club – Upstairs.

It’s a mean world out there. There’s lots of dicks out there. Don’t be one of them –Say Something Nice. 12–20 September, Fringe Hub: Trades Hall – Meeting Room.

Influenced by the city of New Orleans and the best party on earth, Mardi Gras, blended with Cajun party culture, French exuberance, Creole voodoo, masquerade and breath-taking acrobatics, SOCIETY is an indulgent circus cabaret where nothing is off limits. 17–29 September, Wonderland Spiegeltent.