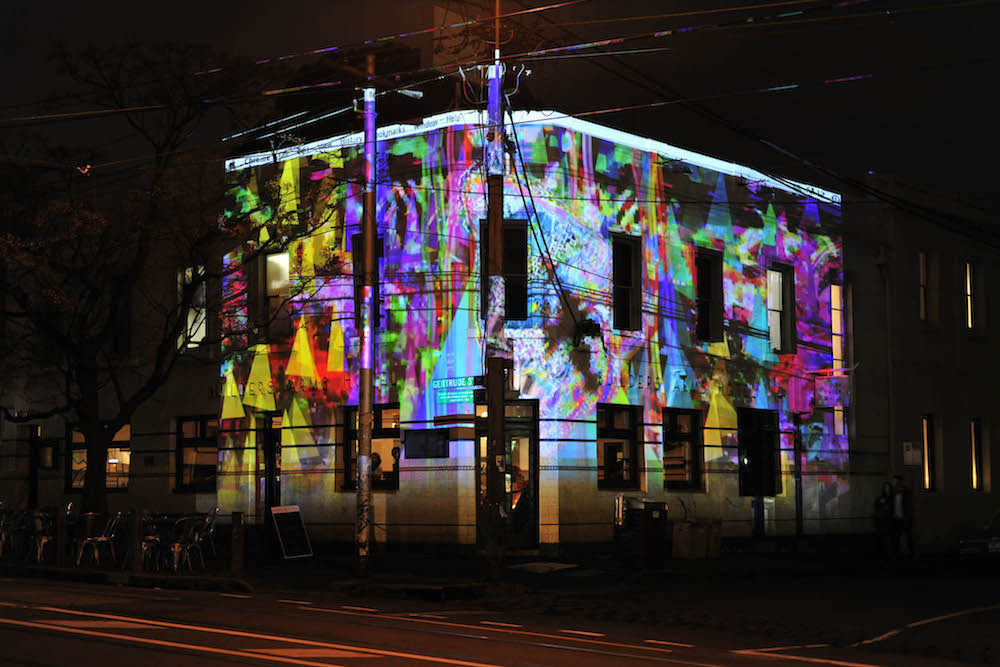 Look up, look down, look sideways – the magical mystery tour that is the Gertrude Street Projection Festival returns to light up the walls, windows, alleys and crannies of Fitzroy’s charismatic street every night after sunset from July 26 – August 3. One of the city’s most loved grassroots festivals and the first projection festival in Australia, GSPF brings the community’s diverse cultures and characters together, wrapped in winter woollies.

“We are thrilled to again be presenting a full streetscape of projections for this year’s Gertrude Street Projection Festival. An exciting group of artists are programmed from across Australia. We are proud Gertrude Street Projection Festival is recognised as the first projection festival in Australia, is still the best locally driven contemporary arts festival and can continues to provide a public platform for Australian artists to experiment and exhibit,” said Bianca Bowman, CEO of the Centre for Projection Art.

The festival will present projects that blur the lines between private and public space, that are experimental, risky, explore projection as a critical medium and embrace the notion of discovery.

This year artists respond to the brief: Resist. Persist. Shift. and analyse the questions: How do we reinterpret traditions? How is projection as an art form shifting, and where to? Over 25 digital media and contemporary projection works have been created which seek to forge alliances, encourage us to persist, and to embrace the world of difference. 2019 artists include Gertrude Street Projection Festival Alumni, established new media artists, those in the early stages of their career and community groups. The full program with artists will be announced June 28.

Expect a contemporary art festival with the community at its heart on the fringes of the city. Discover performance, virtual reality, gaming, sound, light and immersive projection scattered amongst the nightlife buzz. Festival highlights include opening night celebrations, guided walks and an epic closing party curated by emerging producers from Fitzroy’s Yarra Youth Services.

Gertrude Street Projection Festival is in its 12th year as the southern hemisphere’s original grassroots projection art festival. With a renewed and laser-specific focus on intriguing and cutting-edge projection artists, both emerging and established, the not-for-profit festival is looking to rally community sentiment and financial support to ensure the festival’s future. Anyone who would like to generously support can go to gspf.com.au