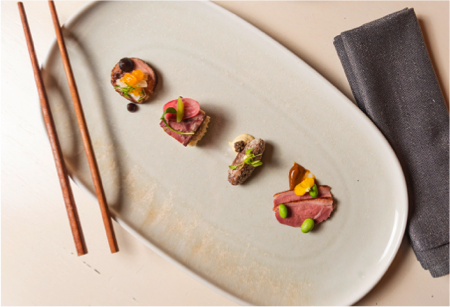 For an evening steeped in the rich history of the famous Silk Road, voyage from East to West on Thursday 12 September in an eight-course matched degustation like no other at David’s Restaurant. The menu is designed by award-winning chefs Matteo Toffano (ex-Grossi Florentino) and Patrick Dang (David’s consultant chef) who were inspired by popular dishes historically found on the ancient trade network of Silk Road.

The special collaboration is a nod to commonly traded ingredients of the famous Silk Road which was known for cultivating fresh produce such as fruit as well as other food varieties usually fermented or pickled. In a stunning display of East meets West, expect a fusion of Asian and Mediterranean cooking techniques, where guests can discover the melting pot of flavours signature to the economic trade between China and Europe up until the 18th century. Both chefs bring their love for history and food to the fore and the result is an exceptional culinary experience that re-imagines the spirit of the historic Silk Road.

Four types of canapés will be served, kicking off with Matteo’s chicken liver and mozzarella Suppli’ a Telefono followed by a David’s classic – the drunken granita St Helen’s oysters with pickled goji berries. Other starters include a smoked lemon octopus Greco with fennel pollen, a tofu ‘burrata’ with wood ear fungus among others.

For main courses, local and fresh ingredients are used to hero a selection of proteins and seafoods prominent during the Silk Road era. The David’s Empire’s duck tasting (pictured above)features a ‘Jiang Ya’ duck with mandarin and fennel, pressed duck terrine with house pickles and green plum, a taro and five-spiced duck croquette with tofu mayonnaise and tea-smoked duck served with sesame sauce and green soy bean. Other delicious duck plates include the peking duck crispy taco (pictured below) and roasted duck wonton in broth.

Originally from Venice, guest chef Matteo Toffano is a passionate chef, presenter and mentor who founded the Knife & Fork Cooking School in Toolern Vale of Victoria’s outer north-west. The school advocates for contemporary cooking in regional Victoria which extends on Matteo’s commitment to sharing his love and knowledge of food to as many people as possible.He has gained recognition working at renowned venues including Michelin-starred restaurant Le Calandre in Padua, Italy with acclaimed chef Massimilliano Alajmo and most recently as Head Chef at Grossi Florentino from 2013 to 2019.

David’s is a contemporary Shanghainese restaurant inspired by Zhou’s hometown Zhouzhuang, a water village in which his family’s recipes originated. Loved by locals for over 20 years, it’s no secret that David’s authentic menu showcases some of the finest Shanghai comfort food in town while treating guests as an extension of Zhou’s own family.