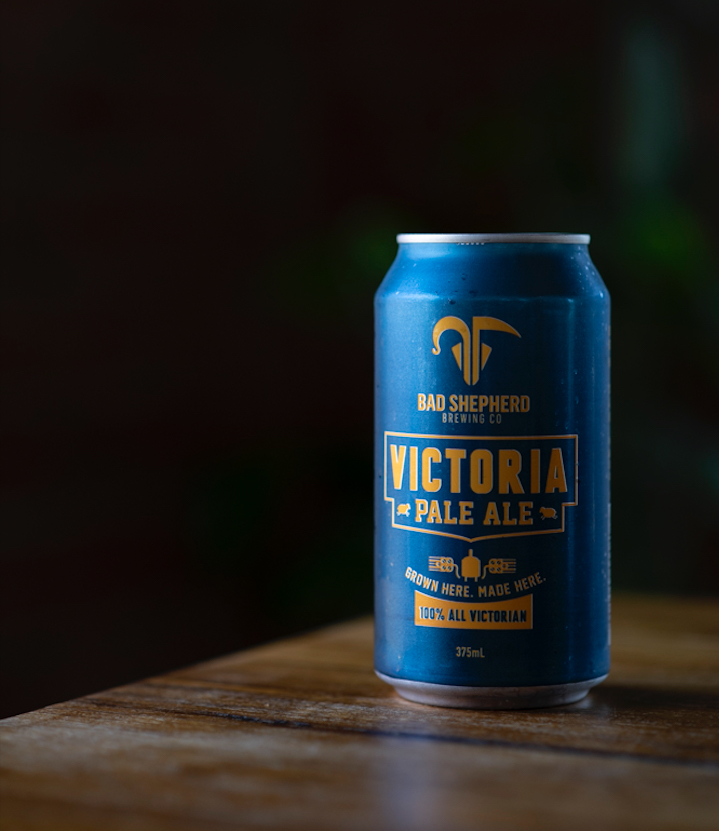 A smashable tinnie made of 100% locally-produced Victorian ingredients

Bad Shepherd Brewing Co. has released the Victoria Pale Ale, a truly local craft beer made in Melbourne with 100% Victorian locally-produced ingredients, including a 100-year-old yeast called Melbourne No.1.

“Most Australian beers use American and European yeast. We set ourselves a tough challenge to create the first completely Victorian produced beer,” says Dereck.

Dereck along with his wife and Bad Shepherd co-founder Diti Hales learned of a yeast strain made in Melbourne in 1889 by the famous bacteriologist Auguste de Bavay. According to The Amber Nectar by Keith Dunstan, de Bavay was “the first man to really apply scientific methods to brewing in Melbourne and more than anyone he lifted the quality of our beer to world class”.

The yeast was rediscovered by beer historian and author Peter Symons, who claims the Melbourne No.1 pure ale yeast was so good it was once dubbed the ‘sire of Australian beer’.

The yeast has been out of use since 1936 and preserved at White Labs, a yeast lab in San Diego California. Dereck met the owner of White Labs during the 2018 Craft Brewers Conference in Nashville, Tennessee in May where they first discussed Dereck obtaining the yeast. Since this time, Dereck and Diti have exclusively propagated Melbourne No.1 to lovingly create the mighty Victoria Pale Ale.

“This beer tells a story. It’s grown here and made here. We are a family- owned, independent business and tread our own path. Local is very important to us,” says Dereck.

Victoria Pale Ale is now available for purchase at all good bottle shops and bars across Melbourne.

Yeast – Melbourne No.1 brought out of the vault for your guilty pleasure