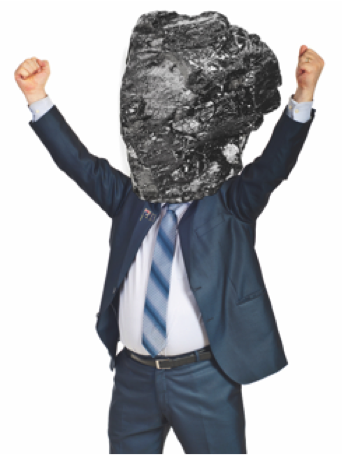 Ten contemporary artists have been commissioned to create a unique poster to provoke public dialogue and accelerate a response to the unfolding climate crisis for CLIMARTE Poster Project II. Hundreds of the posters will be plastered around Melbourne, as well as exhibited at Testing Grounds during the ART+CLIMATE=CHANGE 2019 Festival.

The artists, based on land of the Woi wurrung and Boon wurrung people of the Kulin nation, and on Gadigal Country of the Eora nation, have created a diverse, critical and sometimes alarming collection of responses exploring decolonisation, the transition to renewables, the tragedy of the commons and the impacts of climate damage.

In this second iteration of the Poster Project, key questions have emerged: Whose voices are heard when we talk about climate change? Who has agency to act? How can we amplify the knowledge of significant and affected people and communities?

Eugenia Lim’s The Coal Face (ScoMo) (pictured) collage is a ‘portrait of a politician and a nation on the verge of political, ethical and environmental collapse’.

Peter Waples-Crowe (Ngarigo) takes scissors to a white sheet of paper revealing a 19th century colonial print. The ripple speaks of the ongoing effects of colonisation and the need to respect Indigenous knowledge and wisdom in our response to climate change.

Our future… by Amy Spiers seeks to decolonise and re-Indigenise, as it warns: “Our future depends on respecting Country and Indigenous ways of being.” The message is stated only in local Woi Wurrung and Boon Wurrung languages of the eastern Kulin nation and is illegible for the settler-majority. It reveals just how far still we have to go to recognise the role of Indigenous knowledge in creating a safe, just future for all.

Jen Rae’s 2030 SURVIVAL GUIDE (TIP #19): FIELD DRESSING sends a message straight to the gut: we need to start talking about food scarcity and we need to talk about it now. Rae asks: ‘if disasters heighten disadvantage, what does that mean for commoners?’

Prolific cartoonist Sam Wallman turns the large poster format into a detailed comic strip. A Just transition explores what a shift from fossil fuel dependency to renewable energy might look like in Australia if the workers from those industries were to unite and take charge.

Playing on seasonal colour hysteria, Clare McCracken asks us to look at what Australia’s ‘2019 summer collection’ has to offer. Will you be wearing Tasmania’s matt black from the recently charred remains of 173,000 hectares of native forest? Or will you paint your newborn’s room a ghostly Murray-Darling white? Or re-do your shed a murky Townsville brown?

With strength, optimism and urgency, the works in the CLIMARTE Poster Project II challenge the conceptual possibilities of the poster and call for a collective effort to tackle the mess we are in. Curated by Will Foster, the project also features works by Julia Ciccarone, Kelly Doley, Salote Tawale and Dean Cross.

CLIMARTE Poster Project II is a key initiative of the ART+CLIMATE=CHANGE 2019 festival. If you see a poster: #climarteposter