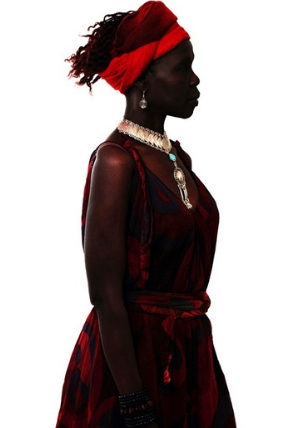 Born and raised in a Dinka village in South Sudan, Ajak grew up in a musical family and began singing as a child. In 1992, due to religious and political persecution imposed by the current government of Sudan, Ajak was forced to leave her home, fleeing to Egypt. She spent the next eight years in exile in Cairo where she formed an all-female group with fellow refugees. Ajak then migrated to Australia in 1999 and joined the small number of Southern Sudanese refugees in Tasmania. She soon became well-known for performing her songs and now lives in Victoria.

Ajak’s performances are filled with vibrant sounds and her distinctive voice has mesmerised audiences around the globe. Singing in Arabic, Sudanese and English, Kwai invokes a vivid picture of her heritage and the separation from her home and family. Music is Kwai’s vehicle for sharing her extraordinary life as a refugee, yet her moving tales of exile are filled with optimism and belief in the goodness of human nature. Ajak has performed at festivals and events around the country, including the Port Fairy Festival, Alice Springs’ Eye of the Storm Writers’ Festival, Melbourne International Arts Festival and The Age Music Awards.

In 2014, Ajak was awarded the African-Australian Community Female Singer of the Year and performed her one-woman theatrical work ‘Of Cows, Women and War’ at La Mama Theatre in Melbourne and at the Adelaide Fringe Festival. Ajak supports numerous organisations advocating for refugees and women’s rights.

Ajak is sure to present a soulful and moving performance at the historic Kew Court House for a rare chance to see a boundary-pushing artist up close and personal.